A few weeks ago I was contacted by a former branch member; he actually had my job when he served in Cameroon, about getting a Meta New Testament back to his church in Florida for a special missions’ time during their Sunday service. In case you missed the former blog post on this New Testament not arriving on time, this current delivery was no failure.

They had recently met a Meta woman who lived near them in Tampa Florida. After getting to know Agnes they found out that her father was one of the first Meta translators back in 1975. So as their church celebrated 25 years of their service to Wycliffe Bible Translators they asked Agnes to read Revelation 7:9 in Meta – not telling her that they had a copy of the brand-new fresh from Cameroon New Testament there. She was overwhelmed when she got up on stage and they surprised her by giving her a copy of the New Testament her father had starting working on almost 40 years ago. There was not a dry eye in the house!

After this I looked, and there before me was a great multitude that no one could count, from every nation, tribe, people and language, standing before the throne and before the Lamb. They were wearing white robes and were holding palm branches in their hands. Revelation 7:9 (NIV) 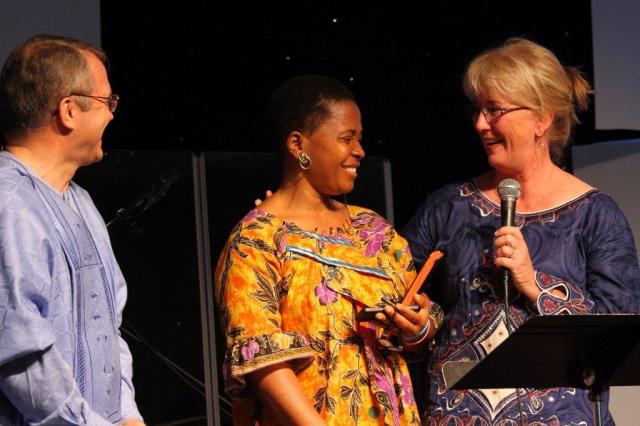 2 Responses to No more waiting