A few days ago Joshua gave his daddy a card for father’s day that stated he likes to go to Worlds of Fun with his daddy. So after a long day of moving yesterday we were given beautiful weather today to head to the park. We were 20 minutes from the house and realized we forgot the camera so we picked up a disposal at a Dollar General. I sure missed being able to see the pictures after I took them, I guess that makes me a digital camera junky. 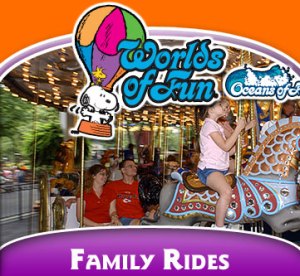 Once we arrived I asked for 2 maps when I parked because I knew that I had two little boys that would both want to help be the navigators, I highly recommend this to all parents coming with multiple children.  As we parked, they planned out our assault attack plan on the amusement park. We headed straight to Camp Snoopy, the home of a big lovable white dog that really seemed to scare Joshua. Jonah loved giving Snoopy a high five, I’d post a picture but I need to take the camera to the store.

After all the kid’s rides except the Worm, the kid’s roller coaster, which was closed because of a part in the motor that was broken we, picked up some lunch. After lunch we found some bigger adult rides that the kids could also ride on. The favorite ride of the day was the Viking Voyager, sort of a plastic looking log that goes up and down and splashes in some water; we went on this ride twice. They were selling priceless pictures of our family at the top of the hill of this ride; everyone had their eyes closed looking nervous except Jonah who was looking at the camera smiling.

Before leaving the park we picked up a snack for the ride home, Jonah wasn’t even able to open his bag of cotton candy before he fell asleep in the back seat. Joshua had a great time but I’ll need to find another activity for him to write about for next Father’s Day since Worlds of Fun will not be an option. Overall I would have to say everyone had a great time.

This entry was posted in Kids and tagged Family Life, Worlds of Fun. Bookmark the permalink.