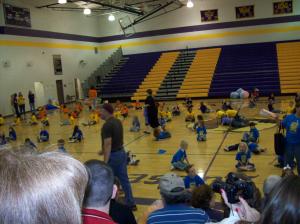 Tonight was the Kindergarten program at Joshua’s school and all 160+ Kindergarteners had a special program to show their parents. As everyone adjusted their tri-pods and prepared their camcorders for the videos to be uploaded to you-tube or possibly catch the next American Funniest Video we waited in eager anticipation as all the children went to their spots they were assigned on the gym floor.

The program started off with a song that they all sang and after that it was time for the motion. There were six separate shows going on all at the same time, even the Ringling Brothers Circus can only handle three events at any one time.

As I followed Joshua around the gym with my finger on the camera button so I wouldn’t miss a good shot I watched him lift the parachute up and down with his class mates in unison and then hide under it. The next location was hula-hoop aerobics and they all did an awesome job of throwing them down to the ground at the exact same time. Next was the ribbon on a stick, then the colorful handkerchiefs that they waved over their heads. I never really figured out the next one, it reminded me of a cross between hide-and-go seek and peak-a-boo. Then they pretended to be swimming with two pieces of lace as at the car wash was played.

For the grand finale they were all given a balloon and they all danced in unison to the Circle of Life song from the Lion King. I was impressed that even when some of the kids dropped the balloons they didn’t fall out of formation to pick them up. We were very proud of Joshua and his cousin Nelson they had an outstanding performance tonight with all their friends.

1 Response to Music and Motion