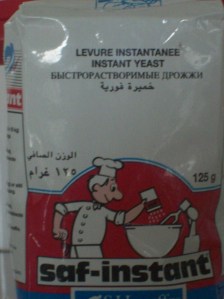 There are many boutiques around the area where we live. A boutique is a small shop normally 5 ft by 5ft that sells all the basic food necessities that people use for the majority of their cooking like rice, flour and other items. When you walk in there is a counter and all the items are on shelves behind the counter and you tell the person behind the counter, normally the owner, what you need. You need to remember to not only bring your own bags but also your own containers because they scoop the flour out of a 50kg bag and give you the amount that you ask for.

DeAnna went into the store and introduced herself and after she asked how he was she explained that she heard that he had the best flour and she would like some, this was all in French without problem.

Then DeAnna asked if he had any Levure. (Yeast in French)

He didn’t understand what she was asking for, so she explained what the yeast does and he said he understood and WROTE the word Revure down on a piece of paper and asked her to repeat it and grabbed a small bag off the shelf and pointed to name of the product.

It was Levure, and then he said no, that’s wrong this is Revure. So if you are ever having problems finding yeast in a francophone speaking country you might try asking for Revure.

This entry was posted in Cameroon and tagged Shopping, Yeast. Bookmark the permalink.