There is a man named André who makes cards (paints them by hand) and also paints pictures.  He brings his things to our gate regularly to try and get people to buy his creations.  David was the first in our family to purchase cards from him.  He came back asking for our house.  The guard came and got me and I was greeted by a desperate André.  He had all his creations and was trying to sell them to me at a big discount to get money.  I asked him what was wrong and he said his 3 year old daughter was in the hospital and he needed money for her care (you pay on the spot).  I gave him some money and he tried to get me to take something he made.  I told him I didn’t want any of the things he brought, but the money could be put towards a future purchase.  I really didn’t think it actually would be credited towards anything and was happy I could help him.

This started a relationship with André.  We live in a very relational society.  He came back with an update on his daughter (she is well) and wanted to know what I would like to put the money towards.  I explained to him how I liked his paintings and would like to know if he ever paints scenes with children.  I told him how I thought it would be neat to have a painting with children of two different colors playing together.  He asked for additional money to buy the materials and I gave it to him.  It took several weeks and he explained how it was the first time he tried to paint a white person, but he returned with a painting we love. 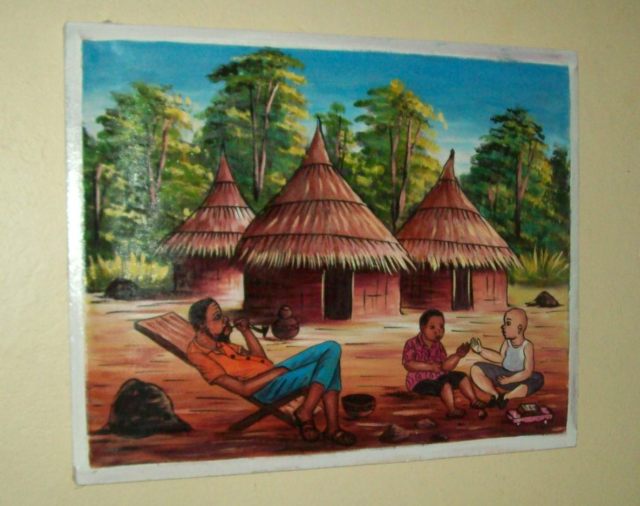 This entry was posted in Cameroon, home and tagged Cameroon, Painting, Pictures. Bookmark the permalink.